What are Scope 2 Emissions?

These are indirect GHG emissions from the consumption of purchased electricity, steam, heating or cooling.

What are Scope 2 Emissions?

What are Scope 2 Emissions? They are the greenhouse gases released into the atmosphere from the consumption of purchased electricity, steam, heat and cooling. Although the CO2e emissions result from an organisation’s activities, they occur at sources it doesn’t own or control. As a result, they are indirect emissions. The are to be included in the Streamlined Energy and Carbon Emissions Reporting requirements.

Do you want to simplify your emissions reporting?  Click the link to find out about GHGi Analytics, our Scope 1 and Scope 2 reporting tool.  It enables you to easily collect, analyse and then complete your greenhouse gas emissions report.

For many organisations, electricity taken from the grid will be the only source of Scope 2 emissions. In simple terms, electricity consumed consists of the following and falls into two different Scopes:

Until recently vehicles owned or leased by an organisation all fell into Scope 1. The rise of electric vehicles (EVs) has changed things. Organisations will now need to account for the electricity usage of these vehicles under Scope 2. However, care will be needed to avoid double-counting if the vehicle charging has taken place at an organisation’s site.

GHGi Analytics takes all of these scenarios into account, when producing a report.  This is required by the Streamlined Energy and Carbon Emission Reporting. 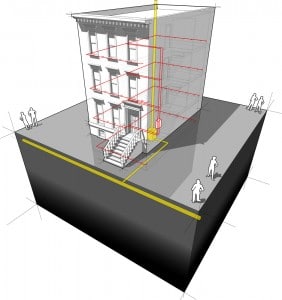 District heating and combined heat and power (CHP) plants sell heat and steam to neighbouring organisations. Special meters allow customers to be billed for the heat and steam used and provided data for calculating the associated scope 2 emissions.

GHGi Analytics is a cloud based solution. It enables you to easily collect and analyse your greenhouse gas emissions. It also simplifies your emissions reporting. Click the following link to see how GHGi Analytics records an organisation’s Scope 2 emissions.

Book a time to talk about what Scope 1 and Scope 2 emissions mean to your organisation.  Bring your concerns to our experienced consultants.

If you want to understand more about Scopes follow this link to the Greenhouse Gas Corporate Standard.