The Paris Climate Agreement was a huge achievement, yet it is woefully inadequate and businesses must consider the ramifications.

Getting 195 nations to agree a way forward on a subject as complex, pervasive and politically-charged as climate change is no small feat. Given the diverse nature of the various national interests, the achievements of the negotiators at Paris should be recognised. But to offer congratulations on the Paris Climate Agreement would be premature and inappropriate.

Not only are there fundamental issues with the agreement struck in Paris (see article ‘Paris Climate Agreement – Mind the gaps’) but serious questions must be asked and organisations will need to contemplate the possible answers.

For the leaders within organisations who need to make decisions based on facts and the balance of probabilities, the broad conclusions include:

So what are some of the implications.

Governments, scientists and advocacy groups will need reliable information to verify that all countries are living up to their commitments.  China’s offer to ensure that its emissions decline after 2030, may be undermined by the fact that no one quite knows how much carbon it emits now. Recent research has come up with wildly varying figures.

In other parts of the world, some measurement and reporting has been in place for a number of years, for example under the Kyoto Protocol for developed nations. But to effect real change a more granular approach is necessary. Again, some good progress has already been made, such as:

More legislation is in the pipeline and at present in Europe the larger companies appear to be the target. For example, Directive 2014/95/EU (see article “Insert title of JFL’s article”) is to be implemented by 6th December 2016.

It is not difficult to envisage that, over time:

Loop holes will need to be closed. For example, revising company car policy can change a business’s emissions from direct (Scope 1 under the GHG Protocol) to indirect emissions (Scope 3). Some corporate reporting at present only requires the disclosure of Scope 1 and Scope 2 GHG emissions.

It will not only be governments that will push for change. Indeed, as climate change is a risk to buildings, supply chains and infrastructure, investors will demand steps be taken. In an interview on BBC Radio 4 just before the Paris climate talks began, Ewen Cameron Watt of BlackRock, one of the world’s largest asset managers, said that climate change was “an issue for every investor”. He went on to say that “what we need over time is better measurement” and on the subject of companies self-certifying their carbon footprint he said, “well, you can understand that we need to move on from that”.

Collecting the relevant information can be problematic and time-consuming – just ask any supplier to an organisation that discloses information to the CDP (see article “Insert title of JFL’s article”). So it will make sense for organisations to investigate how to integrate suitable procedures and software with their business operations.

Another driver for accurate measurement and reporting will be as part of the evaluation of energy efficiency projects and GHG emissions mitigation measures.

Some commentators have said that the Paris Climate Agreement has signaled the end of the fossil fuel era. Indeed, on the first day of trading after the Paris talks, shares in Peabody Energy, America’s largest coal-mining operator, fell by 13%. This was on top of a long decline in coal-mining stocks.

However, as over 4/5ths of global energy is derived from fossil fuels, it is anticipated that the end will be a long drawn out affair. What is already happening within some countries and organisations is a switching of fuel from coal and oil to the lower GHG emitting natural gas. Bob Dudley, Group Chief Executive of BP, said in an interview recently that BP’s business was now over 50% natural gas and the proportion would rise to 60% by 2020, as he saw natural gas as the bridge to the low carbon economy.

But since it’s been estimated that around 2/3rds of fossil fuel reserves will need to remain in the ground if the world is to restrict warming to 2°C, then the value of these reserves held of the balance sheets of companies will be heavily over-stated. These ‘stranded assets’ have been highlighted by a number of observers, including Mark Carney, Governor of the Bank of England.

In order to drive significant mitigation measures, a high and rapidly rising carbon price will be required. This will be particularly important when oil and gas prices are low.  The Paris Climate Agreement mentions carbon pricing but does not obligate its implementation. However, 39 countries and 23 regions, notably the Nordic nations, have introduced carbon pricing. This will alter the financial equation and attract the attention of investors.

There are many areas that will be subject of commercial endeavour and will pique the interest of financiers (see ‘Mitigation – a growing opportunity’). 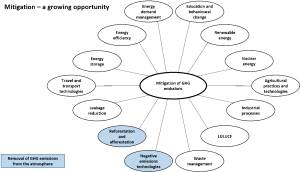 One of the effects of some of the nations’ INDCs will be to drive down prices of certain products. For example, India has pledged to install 100 gigawatts (GW) of solar power capacity by 2022, up from its current level of 5GW. China also has big solar ambitions, which would mean the world’s solar capacity could be doubled within 15 years just by these two countries. Technological advances put photovoltaic (PV) panels with 30% efficiency within reach. This moves the viability of unsubsidised solar PV further from equator, so the solar industry has a bright future.

As some technologies become more affordable, it may be that subsidies are replaced with obligations. In 2003, Merton Council adopted a policy whereby new developments where required to generate at least 10% of their energy needs from on-site renewable energy equipment, in order to reduce annual carbon dioxide emissions in the built environment. The Merton Rule was subsequently implemented by the Mayor of London and many councils. It would be easy to see this concept being applied to other areas.

One of the implications of the Paris Climate Agreement is that carbon dioxide (CO2) will need to be removed from the atmosphere. As Myles Allen, leader of Climate Research Programme at the University of Oxford put it, “The delegates in Paris have just created the mother of all ‘take-back schemes’. Sticking to within 2°C will require us to take lots of carbon out of the atmosphere and store it in the ground”. Therefore, there will be a great deal of research and development in to variations of carbon capture and storage (CCS), such as calcium looping.

Ten years ago talk of adaptation to climate change was generally considered as being defeatist and an admission of failure to implement effective mitigation action.

Michael Grubb of University College London, was recently quoted as saying “All the evidence from the past 15 years leads me to conclude that actually delivering 1.5°C is simply incompatible with democracy”. Indeed, it would be a courageous politician that would take the drastic and costly measures required. And yet, it is now widely recognised by governments and organisations that some changes in the climate will occur.  Article 7 of the Paris Climate Agreement is devoted to adaptation and the UK Committee on Climate Change, the independent body set up under the Climate Change Act 2008 to advise the UK government, states on its website “Some degree of climate change is inevitable because of past and present carbon emissions. Even with strong international action to curb emissions, global temperatures still have a fifty percent chance of rising above 2°C by the end of the century.” Readers will no doubt be aware that we’ve already passed 1°C above pre-industrial levels.

Obvious questions are; by how much will the climate change and over what timescales?  The Intergovernmental Panel on Climate Change (IPCC) has been requested to provide a special report on the impacts of global warming of 1.5°C. But this report will not be published until 2018. Whilst the precise answers to these questions remain unclear, our direction of travel has the clarity of glacial melt-water.

Predicted consequences of global warming include more variable and more extreme weather. The tumbling records and unprecedented meteorological events around the world do not contradict these views.

One anticipated manifestation will be stronger storms. These will inflict higher levels of damage. Therefore, we might expect building regulations to become tighter. However, this would be an impediment for property developers and wouldn’t be compatible with the government’s policy to remove restrictions that would increase the housing stock.

Thus, for organisations seeking to expand or relocate, it would be prudent to look beyond the building regulations in assessing properties’ suitability for the future.

Buildings with glazed façades may be vulnerable to flying debris in strong winds. As time goes by, there are implications for repair costs, business interruption, insurance premium costs, insurability and asset values.

Organisations should consider how to make themselves more climate resilient and should regularly revisit their business continuity plans.

Such is the complexity of our technology-reliant businesses, infrastructures and society that the comments above barely scratch the surface of the direct and indirect effects of a changing climate. One thing is for sure, global warming and climate change will have an increasingly profound impact on our lives, the organisations in which we work and our biosphere.